“Patches of Grey” is a novel about truth, love, family and sacrifice. It is also about the choices that many black men face daily as they try to survive in America. From gang violence to dating across the color lines, Pickering weaves a complex story of hope, forgiveness, love and dreams deferred. I found myself wondering how I would have reacted in certain situations as the author introduced them in the novel. It also made me question some of the truths I have accepted regarding race relations in America.    - OOSA Online Book Club

Tony arrived home to the sight of his father in the tattered recliner that he alone ever sat in, a can of beer in one hand and remote control in the other, eyes fixated on the television set.  The sound of canned laughter reverberated throughout the apartment.  Paper thin carpeting which matched the colorless hue of the walls and ceiling created a claustrophobic ambiance that lack of size could not quite bring about on its own.  The mix and match utilitarian furnishings borrowed more heavily from the rainbow's spectrum.

With everything the world had to offer, Tony marveled at how the golden nectar of barley and a box filled with moving pictures managed to placate his father. Why didn't he need more, or at least comprehend why others might?

Tony was about to open the door to his room when a stern, commanding voice held him in place.

"I've been wanting to talk to you."  Lionel held off on his lecture long enough to take a sip of beer.

"When I was your age I was helping support my family.  I didn't have the luxury of daydreaming about nonsense, and despite what you might think, neither do you."

Tony forced himself not to grin as he informed his father than he had just been out looking for a job.

"Is that right?  About time you got your head out of the clouds.  You need to start bringing some money in here.  Your years of leeching are over.  You’re grown now, at least in the eyes of employers, and they’re the ones who matter.  They’re the ones who can keep you fed, not them books you’re always buried in or those colleges you keep talking about."

It came as no surprise to Tony that a pat on the back would not be forthcoming, just another dose of cynicism and criticism.

"I'm looking for something temporary,” he said. “My head is in the same place it's always been."

"I guess then you've figured out how to pay for college."

"Like I've said a hundred times, I should be eligible for financial aid, plus I might win a scholarship.  If it isn't meant to be, I'll deal.  But I'm not going to give up without even trying."

The chuckling that followed must have dried Lionel's throat, for as soon as the sound left, cold beer filled the void.  This silenced him for but a moment.

"Just keep in mind where that money would be coming from.  White people aren't in the habit of simply giving money away, especially to us.  What they do is make investments.  They take a few dollars from their back pocket, and then that's right where they have you."

"Is that right?"  Tony could have finished each of his father's sentences.  He could not recall the last opinion expressed by him that was surprising or new.

"Debt is a powerful thing.  You better think long and hard about who you're willing to owe, cause the white man's pocket is mighty snug.  Get tucked back there, you may never make your way out.  And while you’re daydreaming about tomorrow, don’t forget that there are bills to be paid and bellies to be fed today.  Any luck with your job search?"

"No, not yet.  I filled out a few applications.  We'll see what happens."

"Keep in mind that it's called work for a reason. Getting a free ride tends to spoil a person.  Well that ride has stopped."

Tony took a seat on the sofa.  His father was just getting warmed up, so he might as well make himself comfortable.

"I remember what I had to endure when I was your age to make a few bucks.  Everything short of picking cotton.  I even shined shoes for a little while.  You didn't know that, did you?  I shined their damn shoes."

Lionel closed his eyes, transporting himself back to a time and place he wished he could forget, but knew he never would.

"You'll do pretty much anything when you're young, and just got married, and have a kid on the way. You'll do whatever white folks will pay you for, even if they don't think you're worthy to eat where they eat or piss where they piss.  If you're lucky, you won't have to go through half of what I did.  But I don't hold much stock in luck."

Tony tuned out the personal history lesson by reflex, much like someone who lived near an elevated track would eventually cease to notice the periodic rumbling of passing trains.

"Times have changed, Dad.  You can piss wherever you want to nowadays."

Tony was fed up with the lectures and berating. He had been told once too often that he did not talk right, or walk right, or breathe right.  All because he was preparing to do what his father didn't have it in him to imagine, or to tolerate.

"You think a couple of new laws and some tokens in high places makes everything fine and dandy?" Lionel asked.  "You don’t actually believe that changes what they think of us, do you?  Getting good grades in school don't mean you know shit about life, boy.  I could have five PHD's, but that wouldn't change nothing.  I could click my heels and think good thoughts all day long, but they'll still see me as a nigger.  You're my son, so how do you think they see you?"

Lionel brought the can to his lips, found the taste of aluminum unaccompanied by beer, so went to get another.  Tony got up and headed to his room.  If his father refused to see a better way to live, that was his choice.  But Tony was his own man, and saw the world with his own eyes. 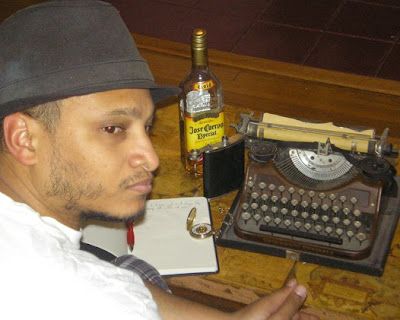